What is participatory research mapping?

Participatory research mapping (PRM) is the application of participatory methodology to make standard maps and descriptive information, combining cartography and ethnography (Herlihy and Knapp 2003, 307). It generally includes the following steps:
1. The academic researchers or NGO facilitators train local investigators, chosen by their own communities, in skills which are both relevant to the PRM project and useful afterwards. Today these include GPS use, and sometimes basic GIS database and cartographic production techniques.
2. Through an unhurried, iterative process of collaborative fieldwork and group meetings, the local investigators and community residents, working with the researchers, convert cognitive mental maps to consensual maps.
3. The team members anchor the PRM products (mainly maps) to a specific location and time, only including features whose nature, name, and coordinates have been locally verified.
4. The PRM research team converts the consensual maps to standardized maps; i.e., in a format legible to a wide range of potential audiences. Most of the actual computer-based work is usually performed by the academic researchers, but always in an iterative process of improvement and verification with the local investigators and communities. For example, the 1993 Darién (Panama) PRM project focused on the systematic collection of toponyms to locate the resource use site[s] and define subsistence lands. The PRM methodology emphasizes the dialectic between the researchers and surveyors to transform the toponyms, sketch maps, air photos, and other information into standard maps and descriptive form (Herlihy 2003, 325).
5. The communities then use the maps for whatever purposes suit them. Typical uses can include education of younger community residents, interactions with government officials or NGOs for specific purposes (e.g., building a road, or defining a boundary), or as part of a larger political action. Examples of much needed proofs of evidence for adjudications of the prior rights of indigenous peoples (Jacobs 2003, 350) have included PRM efforts by the Yanyuwa of Australia (Baker 1999) and the Embera, Wounaan, and Kuna of Panama (Herlihy 2003, 325).
6. The academic researchers may scale up the PRM results and understanding of other data. These findings are often published in peer-reviewed journals, and sometimes serve as part of an effort to advance the geographic understanding among government policymakers.
Beyond the tangible products of PRM (standard maps, GIS databases, academic articles, etc.), the very act of participatory mapping can have real consequences. These may include a new geographic awareness in all who participate (including children), or a reinvigorated community focus as the communicative action of the PRM process is transmuted into an instrumental action (Silk 1999, 11). 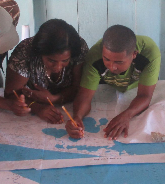